I could have had a sleep in, but my inner clock is set on farm work. That means that I was awake at 5 already. At 7 Lyn and Brett were awake too and one hour later Alyce and the kids came.
Lyn was really nice and invited me to a delicious breakfast. We went to Picnic Point again. It was rainy again and cloudy but the view was nice. We had a good chat and sat down for a while. 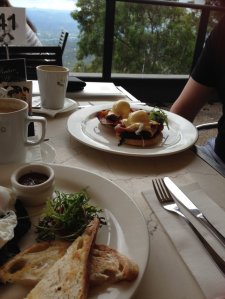 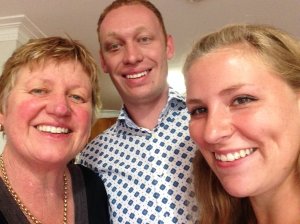 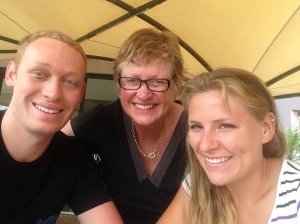 After that they drove me through the luxury part of Toowoomba and it was impressive what massive houses there were.
As the last thing for my time in Toowoomba, we drove to the Japanese gardens which is close to the Uni. It’s big and beautiful. We walked around a bit and as we were on our way back to the car it started to pour. That was good timing. 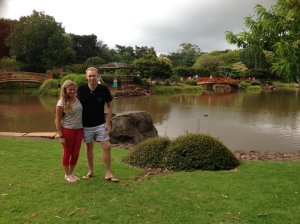 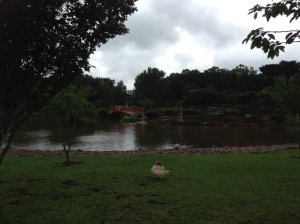 Unfortunately I had to say goodbye to Lyn then. She invited me to visit her anytime when I’m around which I really appreciate. She was so solicitous and lovely to me and I will miss her much.
Brett and I drove to a pub. There were two friends of his which spent two years in Canada and had great stories to tell. Brett’s brother Jarrod came as well and two more friends. We had good talks and they were all really nice. The others drank some beers but I had to drive. We had a nice afternoon but every good time is over at some point.
I don’t like to drive when it’s dark especially when it rains. I said goodbye to everyone. Brett promised to visit me on the farm. I was so thankful that I was able to spend such a great time with him and his family. I won’t forget this great Christmas. Hopefully he will come to visit me.
We gave each other a nice hug and then I started my drive back to my farm.
On the way the roads were partly really wet and I had to be careful, even if I have a 4WD jeep. The way seemed endless and on the 2 hour drive there were just three cars. I had time to think about the last days. That gave me a big grin on my face. My Christmas stocking, the food for the reindeers, the kindness of everyone, the waterslide in the dam, the water fight in the backyard, the traditions, the ride on the motorbike, the cricket match, the church, the bonfire, the shooting and so much more. So different than the Christmas in Germany with cold (okay, this year it wasn’t cold at home, I know).
Back on the farm my boss James welcomed me. He was about to feed the horses. I told him that I’ll do that and he was grateful.
For dinner Uncle Ted and Aunt Rosie were there. From the kids I got another Christmas present. A hat from the Kumbia pub. Now I always have a memory of the good time in Kumbia on my head. The other presents I opened on the 25th were a cup with the logo of the farm and apple-cider. I was a bit concerned because of the alcohol. At home I think it’s not a good sign to get alcohol from your boss but everyone told me it’s a really common present in Australia. So funny the Aussies
We had a nice evening with wine and I was totally exhausted and went to bed early.

That was my Aussie Christmas adventure and I couldn’t think of a better one.